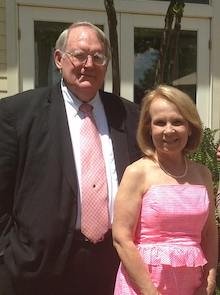 Shirley Wicker is a 1974 graduate of Salem College, a school over 240 years old, as a BA.in English. After having run the Writing Workshop at Central Piedmont College in Charlotte for a couple of years where she taught deaf and blind students, she is currently an English tutor at Spartanburg Community College for the last 4 years. Prior to that, she held a position at Piedmont Federal Savings & Loan, which became First Federal Savings & Loan of SC while she was there for fifteen years. During that time, she received the President’s Pin for excellence in loan origination and insurance coverage.

Shirley has previously served on the boards of the Spartanburg Youth Theatre, The Spartanburg Art Museum, and the Junior League of Spartanburg, where she served as secretary and is now a sustaining member. She currently has a Mobile Meals route, in addition to serving as the VP of Fundraising for  Hub City Hog Fest.

it's not just a competition — it's a great cause!

Since the the Hub City Hog Fest first started filling Downtown Spartanburg with the sweet, smoky smell of barbecue seven years ago, it has raised more than $380,000 for Mobile Meals, and we hope to continue for many years to come. Please come out and not only have a lot of fun, but join with us in supporting this great organization and helping our community!

Scenes from the Festival